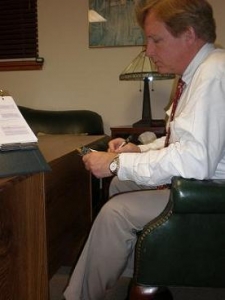 Getting Started—As with psychotherapy, every comprehensive psychological evaluation should begin with a careful interview of the patient, and if appropriate, of the patient’s parents as well, to gather a thorough clinical history. This history should include a detailed accountof the reasons for seeking the evaluation and a history of any related concerns, as well as history and records of any previous evaluations or treatment, related family history, the patient’s medical history, early development, social functioning, school or work functioning, quality and history of important family relationships, and the presence of any prominent symptoms of psychological disorders. Once this information is gathered, the psychologist can then make the best informed decisions regarding which specific tests to include in the evaluation battery.

Attention Problems (ADD or ADHD)—The old diagnostic term for serious attentional problems was “attention deficit disorder,” or “ADD,” which many people still continue to use. The current term (actually, since 1994!) is Attention-Deficit/Hyperactivity Disorder (ADHD); this general category is further divided into the “Restless-Impulsive Type,” the “Predominantly Inattentive Type,” and the “Combined Type.”

There is no single, black and white test for attentional problems, certainly no blood test or other medical laboratory procedure. Instead, psychologists use several tests of various brain and learning functions to see if there is a pattern of difficulties in focusing attention, concentration, and short-term memory. First is the IQ test, which contains measures of auditory attention and concentration. In addition, there are a number of other tests of learning and memory which can provide valuable information. There are also behavior rating scales for parents to fill out, or if the patient is an adolescent or older they can rate their own behaviors. Finally, there are computerized “continuous performance” tests, where patients try to focus attention on rather tedious, lengthy, and repetitive tasks presented on a computer, which allows for comparisons to performances of groups of other subjects of the same age and gender. All of this data is then considered together with personality test results, and with the clinical and family history gathered from the patient and his or her parents, in order to arrive at a working diagnostic formulation which may include ADHD of one type or another. A frequent alternative diagnosis often involves the presence of powerful and persistent feelings of anxiety, which can interfere greatly with a patient’s ability to focus attention and learn effectively.

Learning Disabilities (LD)—When testing someone for learning disabilities, psychologists measure a patient’s level of intelligence as well as their level of achievement in school. Tests of intelligence are usually referred to as IQ tests. While there are many IQ tests available, the ones most frequently used today are the current editions of a group of tests first published by Dr. David Wechsler. They are often recognized by their abbreviations—the WAIS (the Wechsler Adult Intelligence Scale, and so on) for adults, the WISC for school-aged children, and the WPPSI for kindergarteners and younger. Likewise, there are many tests of academic achievement; for most purposes, I prefer to use those known as the Woodcock-Johnson Tests.

The basic method for determining learning problems results from comparing a patient’s IQ scores, which are considered to be measures of someone’s potential, to their achievement test scores, which are considered to be measures of someone’s current level of actual academic functioning. When someone’s test scores in a specific area of academic achievement are significantly lower than their IQ scores (particularly their Verbal IQ subtest scores), the presence of a learning disability in that academic area must be considered. Note that there are several areas of learning and information processing that can be measured, including those in verbal and visual functioning, in both expressive and receptive modalities.

Emotional and Personality Concerns—Testing individuals for personality characteristics is a skill that has been taught less intensively in psychology graduate school training programs in recent years. During my tenure from 1995-2001 as Director of Psychology Training at an APA-approved predoctoral internship program, I had the opportunity to witness firsthand the diminishing skills and experience many psychology graduate students brought to the task of learning how to thoroughly evaluate and understand patients’ personality problems so that useful diagnoses and treatment plans could be made.

My own training in psychological evaluation has been extensive, beginning with the traditional approach taught at the University of Miami’s APA-approved Clinical Psychology Ph.D. program. I received supervised experience in testing at many training facilities over the next several years, including Miami’s Juvenile Court Mental Health Clinic, the University of Texas Health Science Center’s predoctoral internship, Broward County’s Henderson Mental Health Clinic, and the University of Miami’s Student Counseling Center. In addition to my own teaching and supervision of students and less experienced psychologists, I regularly present cases to groups of colleagues for their constructive criticism, and I seek further growth in my evaluation skills through continuing education.

In my opinion, psychologists must be able to measure and understand personality characteristics from several points of view—from the psychodynamic perspective, which offers insight into a patient’s internal, unconscious psychological conflicts; from the behavioral perspective, which seeks to determine the associations and rewards that sustain problematic behavior patterns; and from the comparative perspective, where ratings or responses about the severity of a patient’s symptoms are statistically compared to those found in larger groups of similar individuals. Thus, a well-trained psychologist must possess mastery of theory and evaluation techniques in all these areas.

Regarding psychodynamic techniques, there are several evaluation instruments that are usually referred to as “projective.” By this it is meant that they require a patient to give creative responses to unstructured and ambiguous test items in order to reveal (or project) subtle aspects of their personality which the psychologist will be able to recognize and understand. These instruments include the Rorschach Inkblot Test, the Incomplete Sentences Test, the various “apperception” tests (Note: apperception refers to a process of understanding by which newly observed qualities of personality are related to past experiences)—including the Thematic Apperception Test, the Children’s Apperception Test, and the Roberts Apperception Test for Children—and finally, several drawing tests, of which I regard the Kinetic Family Drawing as the most useful.

Behavioral and comparative techniques have a fair amount of overlap. A true behavioral assessment must start with a very thorough clinical interview, where detailed questions are asked of a patient (and of parents, as well, in the case of a child patient) to try to determine what patterns of behaviors there are which contribute to the emergence of the psychological symptoms which caused the patient to seek evaluation and treatment. It can be very helpful to administer behavior rating scales so that levels of severity can be established, where a patient’s problematic behaviors are compared to a larger group’s ratings on the same behaviors. These rating scales might be completed by parents, teachers, or if old they’re enough, by the patients themselves. They can include such instruments as the various Conners’ Rating Scales for assessing ADHD and other problem behaviors, the Beck Inventories, which assess anxiety and depression, self-rating scales regarding posttraumatic stress, parent rating scales regarding autistic-like behaviors, and several others.

There are other widely used personality tests which employ methods of statistical comparison. I frequently rely on what is perhaps the most well known of these—the Minnesota Multiphasic Personality Inventory (MMPI). This very famous and well researched test was developed in the 1940’s, revised in the 1990’s, and offers an adult version for individuals 18 and older, as well as an adolescent version for those 14 to 17. The test asks individuals to answer a long series of true-false questions about their own beliefs, habits, preferences, and the like. It is then scored and interpreted by computer, resulting in a very rich and detailed comparison of an individual’s many personality characteristics to those of a larger group of individuals.

Given the wide variety of personality assessment techniques available, the most difficult task for a psychologist engaged in such an evaluation is to assemble all the data that has been gathered and then to rely on excellent training and psychological theory to construct a useful description of the patient which helps clarify how problems may have developed, and more importantly, what is the best approach to helping things get better. Many psychology graduate students choose to minimize learning much about psychological testing in their classes and early training. Many more psychologists choose to give up practicing psychological testing once they have finished graduate school and have obtained their licenses. In my experience, it’s rare for most psychologists to continue well into their careers to seek training and supervision in testing theory and technique, which is an unfortunate loss for the profession, and for our patients.

Neuropsychological Testing for Brain Damage—The term “neuro-psycho-logical” (or “neuropsych” for short), has to do with both neurological and psychological concerns. Essentially, this kind of testing focuses on the measurement of different psychological problem solving abilities in order to understand how well corresponding neurological areas of the brain are working. Thus, a variety of verbal and nonverbal skill areas are tested—intellectual functioning, attention and concentration, memory, visual motor coordination and speed, abstract reasoning and judgment, language and communication, sensory functioning, and of course, personality functioning. Typical problems that can be addressed by neuropsych testing include brain damage due to accidents or disease; it can also provide a more detailed approach to the assessment and understanding of learning difficulties.

Many different tests have been developed over the years for inclusion in comprehensive neuropsychological evaluation batteries. In my training, it was emphasized that the backbone of a competent neuropsych battery should always be the IQ test. As mentioned earlier in the section on Learning Disability testing, I typically employ the most widely used IQ tests in the field—one of the Wechsler intelligence scales (e.g., WAIS, WISC, etc.). Other tests are chosen to measure a patient’s functioning in each of the skill areas just described, where the test battery can be tailored to a specific referral question and to the symptoms a patient reports. Finally, a detailed clinical history and an assessment of the patient’s long-term personality functioning are accomplished in order to provide a context for a sophisticated understanding of the neuropsych test results and how they relate to the patient’s symptoms. As one can see, this involves a great deal of testing, and can require eight or more hours of the patient’s time.

The resulting test data analysis seeks to compare and contrast the patient’s scores in each of these skill levels, seeking to specify where there are significant differences among abilities and importantly, conspicuous deficits. The goal here is to arrive at a well documented, definitive diagnosis, and to provide recommendations for future treatment and possibly, rehabilitation.